The point here is that “processed foods” includes a much wider variety of products than most consumers typically associate with the term.

“The idea of saying just avoid processed foods is crazy,” Dawn Jackson Blatner, RD, CSSD, LDN, told The Huffington Post. Yogurt is processed food. It’s actually been cultured and packaged. Canned beans, with no other ingredient besides beans, is processed. This is because [the beans] have been cooked and they have been canned. Where Blatner draws the line with her endorsement is with extremely processed foods, which logically enough, is also where things start to get murky for consumers.

And while this may seem like an issue of semantics

After all, when most people say “processed,” they expect others understand this to be a colloquial term for “unhealthy” — the lack of a clear and official definition for what qualifies as heavily processed foods is extremely controversial in the nutrition community. A new study published in the American Journal of Clinical Nutrition in May has set out to clarify and define what, exactly, is meant by the term.

The U.S. government defines processed food as “any food other than a raw agricultural commodity and includes any raw agricultural commodity that has been subject to processing, such as canning, cooking, freezing, dehydration, or milling.” That seems clear enough. But there’s no agreed upon definition for extremely processed foods, the stuff that nutritionists like Blatner say we should be avoiding at the grocery store.

As the researchers write in the study, “The U.S. government’s definition of ‘processed food’ — any food other than a raw agricultural commodity — includes a diverse array of foods ranging from frozen vegetables, dried fruit, and canned beans to whole-wheat bread, breakfast cereals, prepared meals, candy, and soda.” Basically, any category that includes both soda and frozen vegetables is too broad to help consumers make healthy eating choices.

Americans are buying highly processed foods in large quantities. According to the study, 61 percent of our calories come from these highly processed foods, including refined bread, lunch meat, soda, alcohol, and condiments like salsa and hummus. These foods were also higher in fat, sugar, and sodium than their less-processed counterparts.

Outside of the research world, dividing your shopping chart into four processing categories probably isn’t realistic.

So what should a health-conscious shopper do? For starters, Blatner recommends reading nutrition labels from the bottom up, starting with the ingredient list. Shoppers should keep an eye out for nutritional red flags: chemicals they don’t use in their own kitchens; refined sugar and flour; artificial sweeteners, flavors, and colors; and preservatives (ingredients starting with a string of letters, like BHA and BHT). The more of these red flags on the ingredient list, the higher the chance that the item is highly processed and probably not a smart purchase from a nutritional standpoint.

The important takeaway here is that people are using the same word to mean two very different things. Food manufacturers choose to say that every food is processed, ignoring the fact that not all processed foods have equal health profiles. Health food advocates, on the other hand, may toss the term around incorrectly, as a catchall for anything they consider unhealthy.

“It’s not demonizing processed foods,” Blatner said. “Let’s put an actual word ahead of that –- extreme processing — and then let’s define that together.”

So here, a few surprisingly processed — but still healthy — foods:

Level of processing: Minimally processed. Eggs are heated to a temperature high enough to kill bacteria found in the food, making it safer for consumers.

Why it’s healthy: As a result, Eggs are considered the gold standard for high-quality protein and can increase the body’s levels of HDL, the “good” cholesterol.

Level of processing: Basic processed. First, the fruit is crushed and pressed to extract its juice. This is done without producing any heat that would break down nutrients.

Why it’s healthy: A diet high in fruits and vegetables can ward off stroke and heart attack and prolong your life. Still, you’re better off reaching for whole fruits than juice — a 2013 study found that while eating whole fruits decreased participants risk of Type 2 diabetes, drinking fruit juice actually increased their risk.

Level of processing: Basic processed. Live yogurt cultures are added to strained and pasteurized cow’s milk and then strained to remove the whey, which makes the yogurt thicker.

Why it’s healthy: The natural probiotics in Greek yogurt help promote a healthy gut. On the other hand, greek yogurt is also packed with protein.

Level of processing: Basic processed. Green beans are washed and canned under pressure to prevent food-borne botulism. Canned green beans are affordable and easy to cook with.

Why it’s healthy: Canned green beans are packaged at the height of freshness and contain calcium and vitamins C, K and A (although fresh green beans have higher levels of vitamins and minerals than canned). However, just make sure you aren’t buying the kind with added sugar or sodium. 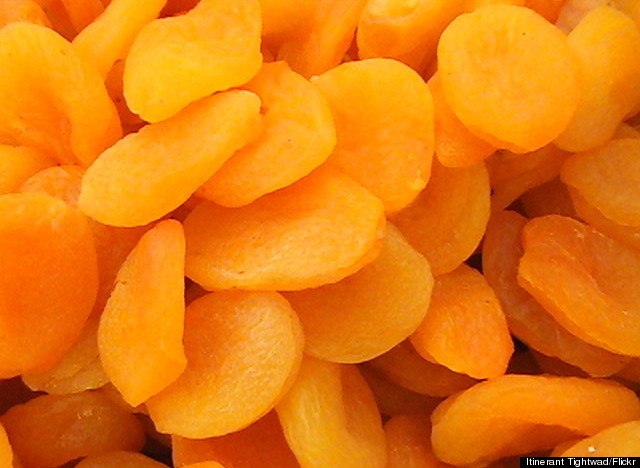 Level of processing: Minimally processed. Pitting and drying apricots preserves the fruit and makes it easier to transport.

Why it’s healthy: Dried apricots are a good source of dietary fiber, and for example, contain even higher levels of iron and potassium than fresh apricots.

Level of processing: Moderately processed. Bread is removed from its original raw ingredients. Wheat is converted to flour, without removing the bran and germ. Then is combined with water, yeast, eggs, oil, salt, and sugar.
Why it’s healthy: Whole grains are a good source of fiber, as well as selenium, magnesium, and potassium.

Level of processing: Minimally processed. Freezing meat preserves it and stops bacteria in the food from multiplying.

Why it’s healthy: Turkey contains vitamin B, which aids brain development during pregnancy, as well as the mineral phosphorus, which helps build healthy teeth and bones.

Level of processing: Basic processed. Making olive oil is a multi-step process, including washing the fruit, pressing it and extracting the oil from the resulting olive pulp.

Why it’s healthy: Olive oil contains monounsaturated fatty acids, which are considered heart-healthy and could lower your risk of heart disease.

Level of processing: Moderately processed. From testing for a “clean break” to separating the curds from the whey, making cheese is not a simple process. Here’s one professor’s 21-step illustrated recipe.

Why it’s healthy: A recent study linked a diet rich in cheese to a decreased risk for obesity and a faster metabolism. Meanwhile, cheese needs to be consumed in moderation.

Why it’s healthy: Green tea contains catechins, which have been linked to lower body fat and a decrease in obesity.

Level of processing: Minimally processed. Shelling makes almonds easier and more convenient to eat. Following two salmonella outbreaks in California in the early aughts, the USDA has required all almonds (even “raw” ones) be pasteurized before being sold to the public.

Why it’s healthy: Almonds contain more calcium than any other nut, as well as protein and heart-healthy fats.